The recent terrifying wildfires in Australia have brought tragic devastation to not only individuals and local economies but also to the estimated 1 billion animals who have been killed along with the loss of their habitats and precious ecosystems. This disaster has once again brought to the fore the issues of climate change and its impact on us all. Our ecologist Connor Mckinnie highlights the import role that Scottish peatlands can play in fight against Climate Change 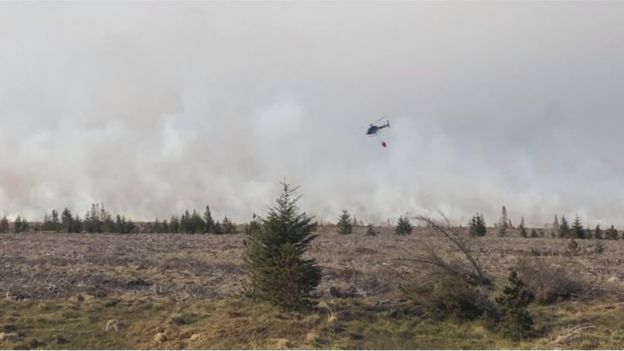 "Whilst, these fires rage thousands of miles away it is easy to forget that here in Scotland we have recently had deal with the impact of our own wildfires.

One of these was in the Flow Country, in Caithness and Sutherland.  An internationally important peatland and wetland site, the largest of its kind in Europe, the Flow Country covers around 1500 square miles and contains huge expanses of blanket bog habitat, providing home to some of our rarest species of flora and fauna. Such is its importance, it is currently being considered as a potential World Heritage Site."

"However, in May last year, some 22 square miles of Flow Country was burned by a significant wildfire due to dry conditions. As a result of the fire, it is claimed 700,000 tonnes of carbon was released into the atmosphere."

"Scottish peatlands are a vital weapon in the fight against climate change due their capacity to store carbon.  Indeed it is estimated that Scottish peatlands contain the carbon equivalent of 140 years’ worth of Scotland’s annual greenhouse gas emissions."

"If you take a walk up into a moorland in Scotland you will often find drainage channels which have been dug into the peat.  This method has been utilised by farmers and estate workers to help create better conditions for agriculture, however as a consequence, the peat dries out and becomes susceptible to erosion – and fire."

"The Scottish Government has realised the importance of peatlands as a carbon store in their mission to meet their emission reduction targets, and has announced £20 million in funding towards peatland restoration.  Last October I attended an SNH Peatland Action training event and got to see first-hand how this money is being spent and what restoration techniques are being used. We were taken up onto the moorland and watched as an estate worker skilfully drove a digger across the heather, blocking channels with chunks of peat. Stripping the top layer of heather he was able to cover exposed peat hags."

"By applying these techniques, it is anticipated that water will naturally pool again, restoring the peatland blanket bog. The bog is made up of Sphagnum moss, which can hold 30 times its own weight in water. Encouraging moss growth allows the ground water table to grow, thus preventing flooding in lowland areas, improving wetland habitats for biodiversity and of course, reducing fire risk. It is therefore vital that restoration work continues to protect and improve these special environments in our bid to tackle the ever growing threat of climate change."

"It is therefore vital that restoration work continues to protect and improve these special environments in our bid to tackle the ever growing threat of climate change.”

Find out more about the solutions we offer in Peatland Management or contact a member of the team today.

This site uses cookies to store information on your computer. Read more...

I am happy with this